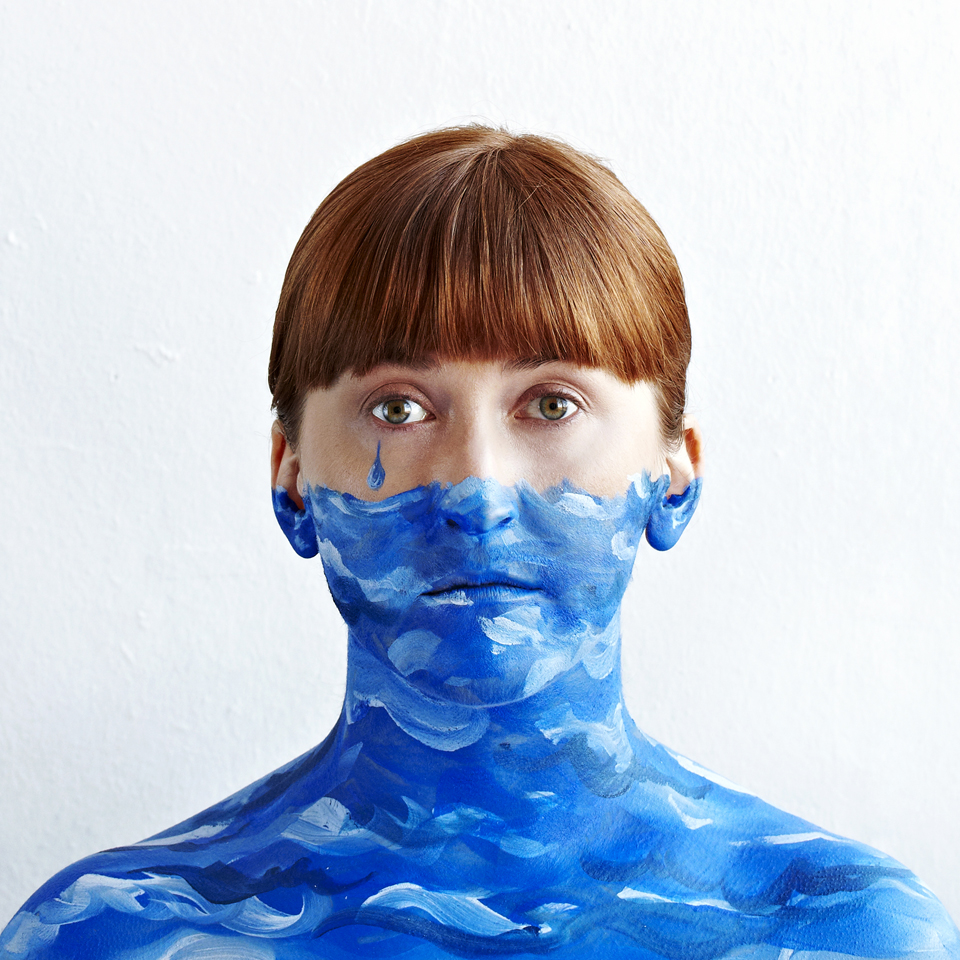 It is said that no (wo) man is an island, entire of itself, but if Liz Green‘s highly acclaimed debut album O, Devotion! says anything it’s that she exists in a certain kind of isolation, as a uniquely exceptional, “eccentric and rather magical” artist, (to borrow words from The Guardian). One does not just stumble across her music to be left unmarked. She gives too much for that. Her first musical missives in 2007, set afloat like so many bottled messages, saw her win Glastonbury’s Emerging Talent Competition before finding land in 2011’s full length, and now its emboldened follow up Haul Away!, due out via PIAS on 14 April 2014, is set to reach the most distant of shores.

“Haul Away! is about Communication. Language. The Insufficiency of Words. Home. How to Fit in. Escape. Sea. Elemental Forces. The Edge of Something. Travel. The End of Something. Mythology. Love Lost. And Death.” And “Obviously, I like to throw some death in there. I don’t want anyone to think I’ve changed too much. Actually, I think only one person dies on the album. The rest is open for debate. I’ve certainly shown them the way out. If they can’t find it, it’s their own fault!” Green jokes. Her second album then continues to speak to her unique character (as droll as it is dark) while it also finds her becoming a piece of the continent, a part of the main by realising that these “Lonely little songs need some company”. Luckily they have it in the form of a band of friends, who accompany her voice – a wonderfully warm melange of styles – and newly grounded piano compositions, surrounding them in bass, saxophone, drums, tuba, trombone, cello and flute “like a life raft or armbands.” Some of them even sound like her “most cheerful” songs to date.

Returning to the venerated and legendary Toe Rag studios to work with O, Devotion! producer Liam Watson because there is no denying Liz and Liam is a winning combination and because she “learnt from the last time round that it’s hard to find somewhere to record that I feel at home in.”. And although two people found themselves in the same space as they were three years ago, it has been used differently. As far as possible, everything was done live, with all of them in the same room, Green believing “that’s how Toe Rag should be used. I like working with the recording devices that are in there. They are tangible and have presence, everything has a history. It makes the whole thing seem more alive. Tape machines will always be slightly different. Over time they develop their own idiosyncrasies. Like humans. Even the mixing is done live to tape. No two mixes will ever be the same. You can’t save and carry on a bit later. Everything has life.”

“Like O, Devotion!” she notes “some of the songs on it have had a pretty long gestation period. Things creep around my brain for a long time before I can catch them. I don’t write quickly. I am not, and will never be, a prolific artist. I am a very slow artist.” A quality that can be forgiven when the results are so special. Recording wise this results in a less claustrophobic affair “ I feel O, Devotion! was a dry bitter earth of an album” says Green. “And Haul Away! is a breath of the edge of the world. The Ground vs The Sea I suppose. There’s more life and more going on. Not so much a homage to what I like. Hopefully it sounds a little more like me.”

One of the marked differences between this record and the last comes from the fact Green started playing the piano (set up next to the bed for quick fire midnight dream melodies), tracks like ‘Little i’, named after the Little Eye in West Kirby and created around a soothing key driven refrain signifying her “first foray into no-word music.” “I did listen to a lot of music with pianos on” she adds. “Like Thelonious Monk and Nina Simone. I can’t play piano like any of them. But I did like listening. Also to a lot of music without words. That’s quite different. Usually I listen to music because of the words. Lately I’ve been listening because of the music.” Amongst other musicians gracing her ears lately she notes Baby Dee, David Bowie and Bill Ryder-Jones’s If…album as influences but stresses that it’s mainly friends’ bands like the Moulettes that impact her. “You learn the most from the people you tour with and the people who are closest to you. I often feel like The Fraudster of the bunch. I work more off gut instinct and emotion than any kind of serviceable talent.” We beg to differ. As will others.

An eleven song set that begins with the swelling organs of drone-blues love song ‘Battle’ (sounding like a “distant whirring of a helicopter come to rescue you from the battlefield”) and ends, appropriately, with the last song written and recorded by Green and her band ‘Bikya’, Haul Away! finds its centre in the Etgar Keret-style escapism inspired title track (a short story that’s like “Narnia for adults, without the talking animals or heavy christian references”). “It’s my favourite song on the album” explains Green of its sea shanty like rhythms and greek mythology explorations. “It’s the idea of being the loud and brightly coloured clown in a sea of grey. Feeling like nobody really gets the joke. And wondering if there’s somewhere you can go where everyone’s a clown. And no-one will look at you weird if you keep falling over. Or your trousers don’t fit properly. Or your hair’s a bit funny and you keep saying odd things at inappropriate times. And laughing at funerals.”

It’s also the song that’s responsible for the main imagery on the album. “The face of tears and the song names in bottles, where every name in every bottle has its place. I imagined a land where all those messages that get sent in bottles ended up. And presented the song titles as such. I was really quite panicked as to what would be the cover. Until the sea face image popped into my head. Just playing on the idea of being filled up with sadness. So much so it overflows and creates a sea. You could drown in it. That happens in Alice in Wonderland doesn’t it? She almost drowns in her own tears.”

Tears are never quite as they seem with Green, a happiness lining her saddest creations, staving off maudlin sighs and celebrating life. The first track lifted from the album ‘Where The River Don’t Flow’ is apparently “a happy song, really” even though it is born from her fascination with “the rituals and business of death” and Dante’s Inferno, its woozy, wonky, circus sounds inspiring visions of rowdy wakes rather than tearful mourners: “A chapter closes. A chapter opens.”

Even though she is reluctant to say so, Haul Away! is also of course about love, a glorious glass-half-full love, (one which sees anti-love stake its claim in unintentionally Nick Cave named album highlight ‘Into My Arms’) which she is destined to be on the receiving end of the moment people hear the it– from those already enamoured (Jo Whiley, Gilles Peterson, Marc Riley, Nemone, John Kennedy to The Sunday Times calling her debut “sensational”) to the people waiting on those distant shores. And with that, another Liz Green chapter opens.

Liz Green press quotes:
“A sensational debut” Sunday Times ‘Album of the Week’
“A vital, vibrant, very English 21st Century musical force” 4/5 The Sun
“4/5” Q
“4/5” Uncut
“To call Liz Green a one-off talent is something of a drastic under-statement” Esquire
“Eccentric and rather magical” 4/5 The Guardian live review
“O, Devotion! finally fulfils expectations” 4/5 Daily Telegraph
“Her USP is her extraordinary voice” 4/5 Metro
“O, Devotion! brims with depth, detail and fleet drama” The Independent
“Lesser performers will be jealous as hell” The Fly
“Wonderful” ‘Single of the Week’ Guardian Guide
“A deliciously dark and serpentine journey” 4/5 Daily Mirror
“What makes O’ Devotion! an album to savour is Green’s wonderfully expressive voice” Diva
“Her enchanting mix of muddy blues-tinged folk songs possess a warmth that gets immediately under your skin” Music Week
“Liz Green has that something special in abundance and O Devotion! is a truly special album” 4.5/5 Music OMH
“A surfeit of simple yet beautifully crafted songs” 8/10 Drownedinsound
“O, Devotion! is a strong, fascinating debut that asserts Liz Green as a unique talent to be reckoned with” thelineofbestfit