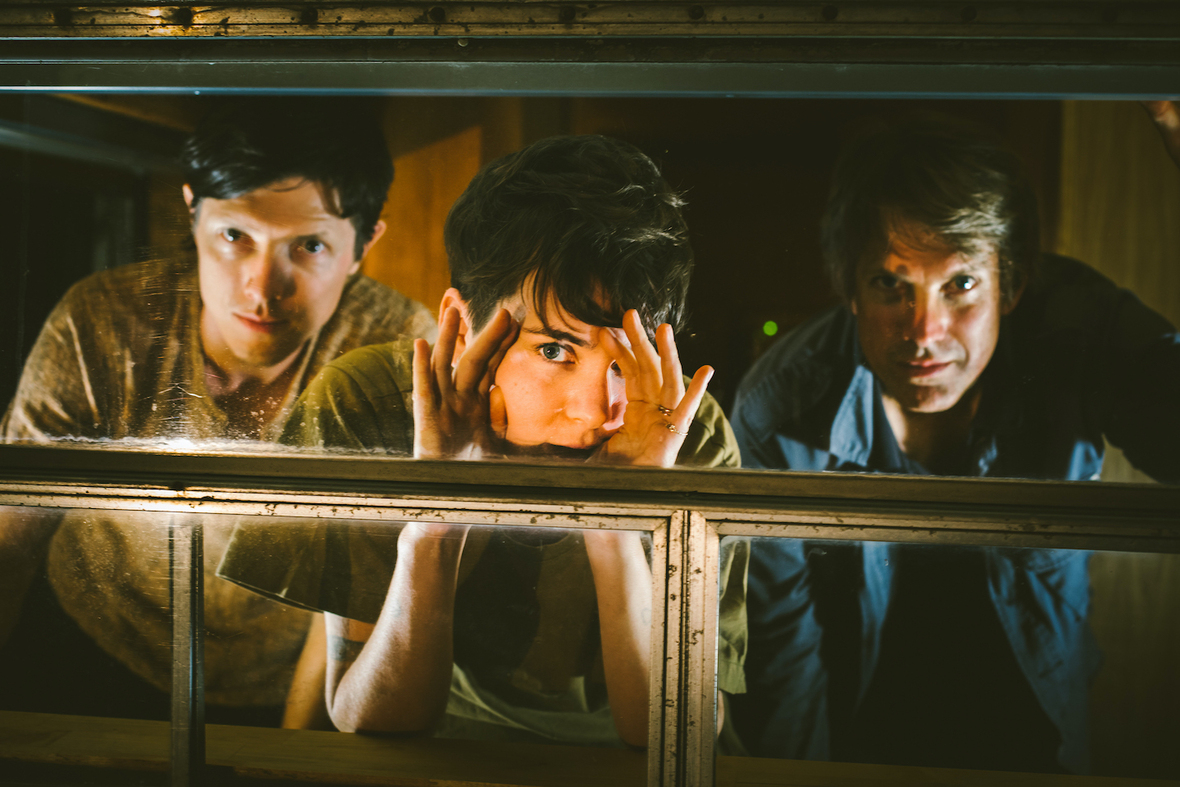 Loma (Emily Cross, Dan Duszynski, and Jonathan Meiburg) have today announced that Don’t Shy Away, their incredibly absorbing new album and the follow-up to their acclaimed, self-titled debut, will be released on 23 October on Sub Pop. The eleven-track record was produced and recorded by the band at Dandysounds in Dripping Strings, Texas—with the exception of ‘Homing’ which was produced by Brian Eno.

Today they have also shared lead single ‘Ocotillo’, a rumbling, swelling and powerful return. Blasts of brass and rich guitar build to a thunderous crescendo that offers a snapshot of the growth of the band and their sound on Don’t Shy Away.

Speaking of the track the band say:

“Ocotillo is a graceful, spindly plant that flowers extravagantly after rain—but it lives in places where it doesn’t rain for months, even years. It’s not hard to identify with it.”

Don’t Shy Away was never supposed to exist. Loma began as a serendipitous collaboration between Cross, the multi-talented musician and recording engineer Dan Duszynski, and Jonathan Meiburg, who wanted to play a supporting role after years at the microphone. Their first record, born out of this collaboration, received widespread acclaim and culminated in a gruelling tour with a standout performance on a packed beach at Sub Pop’s SPF 30 festival, in which Cross leapt into the crowd, and then into the sea, while the band carried on from the stage—an emotional peak that also felt like a natural ending. “It was the biggest audience we’d ever had,” she says. “We thought, why not stop here?”

Around this time Emily Cross received an excited email from a friend: Brian Eno was talking about her band on BBC radio. Eno was praising ‘Black Willow‘ from Loma’s self-titled debut, a song whose minimal groove and hypnotic refrain seem as much farewell as a manifesto. He said he’d had it on repeat.

With Eno’s encouraging words resounding in their heads – as Cross went to rural Mexico to work on visual art and a solo record, while Meiburg began a new Shearwater effort – something drew this group of people back together. Much in the same way Loma formed in the first place, they found themselves back in a room together. They reconvened at Duszynski’s home in rural Texas, where they began to develop the songs that would become Don’t Shy Away.

Loma writes by consensus, and though Cross is always the singer, she, Duszynski and Meiburg often trade instruments. Meiburg compares their process to using a ouija board, and says the songs revealed themselves slowly, over many months. The album that emerged is gently spectacular—a vivid work whose light touch belies its timely themes of solitude, impermanence, and finding light in deep darkness.

Don’t Shy Away is shot through with revelations, both joyful and sober, and winds from moment to moment with confidence and humour. Like Loma’s first effort, there’s a tangible and sensuous feeling of place; insects sing in the trees, an ill-fitting door creaks in the wind. But there’s also a daring and hard-won wisdom, underlined by Cross’s benevolent clarinet, which often sounds like an extension of her singing voice. A series of guests wander through these absorbing soundscapes, including touring members Emily Lee (piano, violin) and Matt Schuessler (bass), Flock of Dimes/Wye Oak’s Jenn Wasner, and a surprisingly bass-heavy horn section.

Preorders of Don’t Shy Away are now available from Sub Pop. LP preorders in the U.K. and Europe through select independent retailers will receive on dark green vinyl.

“A manifestation of brilliant musical minds in organic workspaces”
The Line of Best Fit, ‘Song of the Day’