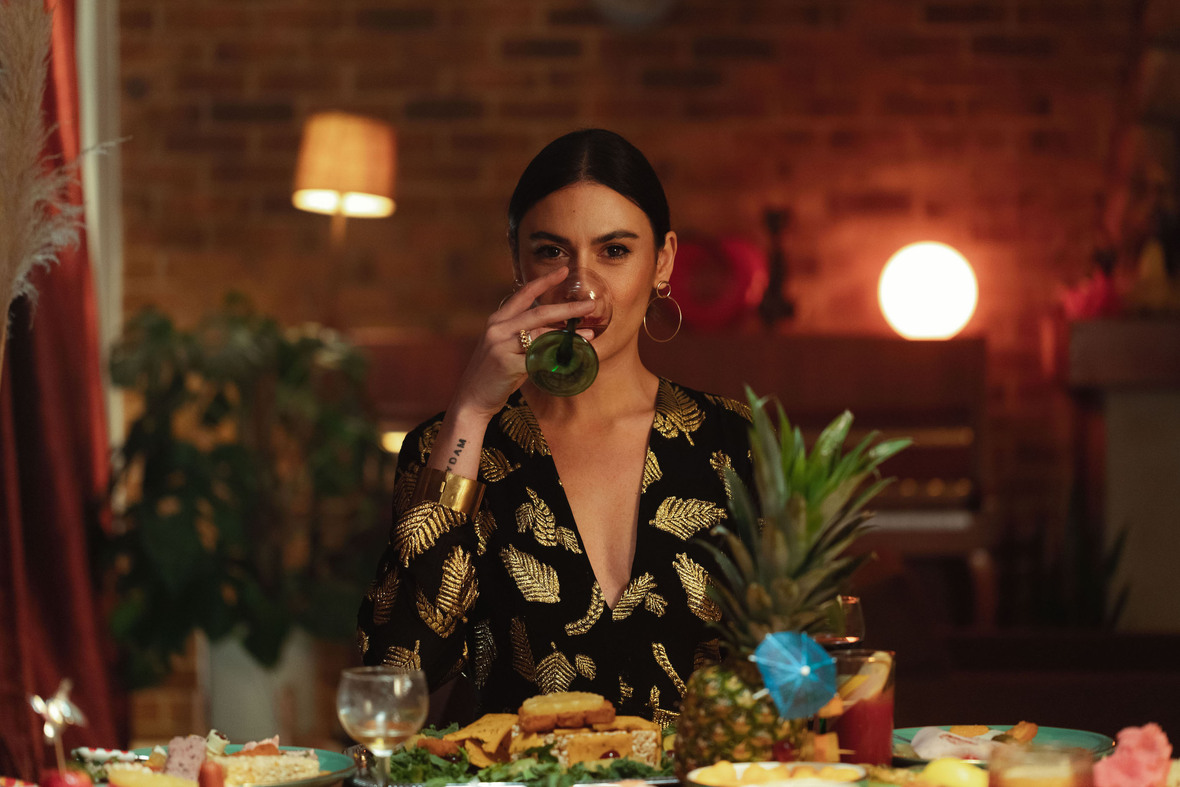 Watch the video for ‘Ladies For Babies (Goats For Love)’ here:
https://www.youtube.com/watch?v=XX9bxRCVWnI

Nadine Shah has today announced her fourth studio album, Kitchen Sink will be released on 5 June via Infectious Music. Along with the announcement she has shared the video for lead single ‘Ladies For Babies (Goats For Love)’. The video is directed by Matt Cummins and Shah stars alongside Craig Parkinson (BBC’s Line Of Duty / Black Mirror) in a setting that glances back to a time and place where the context of the song feels very much at home.Speaking of the track Shah says:

“My brother was making a comment on sexism when he was younger and made a painting of a man embracing a goat with the phrase “ladies for babies, goats for love”. It always stuck with me, I guess cause it sounded daft but really because even back then I knew its true meaning and intent. I was also thinking about a lot of the songs I would have been listening to at the time, songs I sang along to innocently without question of the meaning. ‘Ladies for Babies’ is a direct response to ‘All That She Wants’ by Ace of Base. I reversed the gender and I poke fun at a husband who expects nothing more from me, as a wife, than to carry his child and perform the role of the obeying subservient trophy wife. Only this time the mistress is a farmyard animal. A lot of my album explores subjects of sexism and tradition. It’s not all about beastiality, I promise.”

Kitchen Sink follows up Shah’s Hyundai Mercury Prize nominated 2017 album Holiday Destination – a triumphant unification of a political message with an infectiously driving groove which received critical acclaim including AIM Awards ‘Independent Album of the Year’, a #7 ‘Album of the Year’ from BBC 6 Music and #5 from The Quietus as well as prominent positions in lists from Loud and Quiet and The Line of Best Fit.With the same ferocious determination and distinct voice Shah now turns her sights closer to home with an album that explores her own story as a woman in her 30’s and the societal pressures and expectations that come with that. The album also tells the stories of countless other women she has met and their differing yet equally very similar experiences.

“It’s a conversation between me and so many of my friends in our 30’s. There’s that panic that so many of us have that we are running out of time, when it comes to having children. It’s like when we were younger we all made our own timelines in our minds of when we thought we would do certain things. If you were to tell 14 year old me I’d be 34, unmarried and have no children I’d have never believed it. Lots of my friends I’ve spoken to did this very same thing.

My entire friend circle of women I grew up with now have children. I’ve watched some of the biggest idiots (I say that totally in jest!) become the most amazing mothers. I’m happy for them, properly happy for them. I worry for them whenever they doubt themselves and am here for them to support them when they need me. I’m proud of them. But you can’t help but compare your situation to the ones around you and this is what a lot of me and other female friends are feeling in our 30’s and 40’s. This pressure.

For the album I spoke to so many women. Women who want to have children and can’t physically, women who can physically but choose not to, all different scenarios. My good friend, a woman in her late 50’s chose not to have children and continues to be one of my favourite musicians and most youthful vibrant person I know. Her story is in this album too. Essentially I’m writing about so many women that I just love. The new mothers, the rock stars, the ones doubting themselves who need our support, the ones who are ill but show an indescribable strength.

There’s traditions that were set out years ago of how our lives should be and that has changed completely now and I for one am so proud to be a woman and to be surrounded by even greater ones.”

“A bold, heartfelt beast that wears its politics and defiance firmly on its sleeve”
8/10 Loud & Quiet ‘Album of the Week’

“Nadine Shah has released the most accomplished, accessible, and important protest album of the year”
8.5/10 The 405

“Hypnotic, righteous and utterly compelling, Nadine Shah’s third album is an extraordinary exploration of the health of our country and our world”
The Quietus, Lead Review

“A beautifully realised disturbance of any remaining peace”
4/5 Mojo

An album of such beautiful horror”
8/10 Drowned In Sound

“A literate and courageous work, Holiday Destination faces down a fucked-up world with guile and with guts”
4/5 The Skinny

“So tragically and perfectly fitting for 2017”
London In Stereo

“One of UK music’s most underrated voices”
Time Out