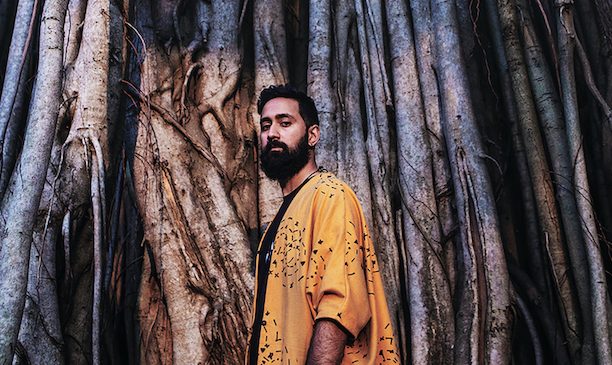 SHARES VIDEO FOR LEAD SINGLE ‘UTOPIA IS A COLONIAL PROJECT

‘Watch the video for ‘Utopia Is A Colonial Project’ here:
https://www.youtube.com/watch?v=TbJ6n5pvSOI

Sarathy Korwar returns with new album KALAK. The follow up to the politically charged, award-winning More Arriving (AIM ‘Independent Album of the Year‘, Mojo ‘Jazz Album of the Year‘) is an Indo-futurist manifesto – in rhythmic step with the past and the present, it sets out to describe a route forward. It celebrates a rich South Asian culture of music and literature, which resonates with spirituality and community, while envisaging a better future from those building blocks.Lead single ‘Utopia Is A Colonial Project’ is accompanied by a nocturnal, neon-lit dance video by Elliott Gonzo (Perfidious Productions), starring award-winning choreographer/dancer Botis Seva. Based on Thomas More’s book from 1516, Korwar takes the idea of this imagined land of perfection and flips it on its head.

Speaking of the track Korwar says:
“Utopia can be seen as a diagram for colonisation. Ideas of utopia are intrinsically linked to the mindset of settler colonialism. It comes from seeing the natural world as an inanimate resource rather than a living, sentient being. We need to be anti-utopian, and anti-dystopian. We need to be able to imagine futures drastically different to the kind of ‘utopias’ that are being sold by right-wing populist politicians in South Asia and beyond.”

KALAK was recorded at Real World Studios with meticulous production by New York electronic musician, DJ and producer Photay, who translates these communal rhythms and practices into a timeless and groundbreaking electronic record. With The Comet Is Coming’s Danalogue on synths, Tamar Osborn’s baritone sax, Al MacSween on keys and percussionist Magnus Mehta, who all performed on More Arriving, the album also features vocals by Kushal Gaya of Melt Yourself Down and Mumbai-based producer and electronic artist Noni-Mouse, as well as a track recorded with Japanese drum ensemble Kodo. There’s a spirituality and warmth at play in the polyrhythms, group vocals and melodic flourishes.

“The discourse around futurism is often deeply rooted in Eurocentric ideas of the world”, Korwar explains. “Much like Afro-futurism, Indo-futurism is moving the focus to the global south. In South Asia, culturally, we envisage our relationship to the future and the past in ideas of cyclicality. For example, karma as a concept. Time doesn’t have to flow in a line but can be understood to flow in a circle.”

“In music, there’s an inherent hierarchy when you talk about left to right and top to bottom. I started thinking about a rhythmic notation system that was circular. These patterns started forming over time, and the more I thought about that, and the kind of symbolism that they began to have, I realised that this would be the core of the record.”

The resulting KALAK rhythm is the fulcrum upon which the 11-track project balances. After an intense period of reflection and note-making, Korwar boiled this down to the circular KALAK symbol.

The final part of the KALAK project is realised in the cover artwork by New Delhi-based designer Sijya Gupta. Korwar and photographer friend Fabrice Bourgelle took a light sculpture of the KALAK symbol on a road trip around Southern India, through Chennai, Pondicherry and Auroville. The evocative shots appear on the cover of the various formats, with each one offering a different angle on the country, continent and culture that inspired the album.

KALAK will be released on November 11th in three vinyl editions (on black, dark green, and for a special 400 limited Dinked Edition, crystal clear vinyl) and a CD, each featuring a different cover image. All vinyl editions include an 8-page booklet, created by Sijya Gupta, with Korwar’s notes on the concepts behind the project. The Dinked Edition, available exclusively from select independent UK record shops will also include a rotating card wheel which illustrates the KALAK rhythm.

1. A Recipe To Cure Historical Amnesia
2. To Remember (feat. Kushal Gaya)
3. Utopia Is A Colonial Project
4. Back In The Day, Things Were Not Always Simpler (feat. Noni-Mouse)
5. The Past Is Not Only Behind Us, But Ahead Of Us
6. Kal Means Yesterday And Tomorrow
7. Remember Begum Rokheya
8. That Clocks Don’t Tell But Make Time (feat. Kodo)
9. Remember Circles Are Better Than Lines
10. Remember To Look Out For The Signs
11. KALAK – A Means To An Unend