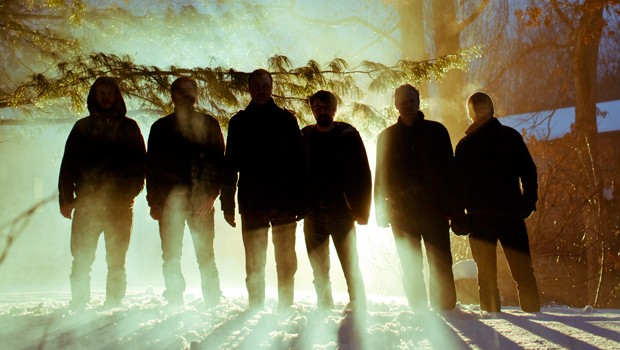 “Here’s proof that Justin Vernon can summon emotional torrents regardless of context… whatever Vernon does next, hitting the right notes won’t be a problem” Mojo

“A luminous, experimental looseness” 4/5 Time Out

“The new Americana can be at its finest when it embraces loveliness, as with the Akron/Family or Fire On Fire. Unmap bolsters that emerging tradition with honeytoned aplomb” Wire

You might find these old friends also frequenting records and stages under different monikers, namely Bon Iver and Collections of Colonies of Bees. The collaboration predates the meteoric rise of Justin Vernon’s Bon Iver project, with original songwriting dating back to the summer of 2005, right around the time the Bees first toured with Vernon’s previous band DeYarmond Edison.

While entirely a studio record, the collection doesn’t suffer from the overburdens of a digital pile up or over-thinking. Rather it breathes and convulses in equal measure, radiating an inherent energy found only in the voluntary bondage of intimacy. With the confluence ranging from David Sylvian, a tip of the hat towards Steve Reich’s Music for 18 Musicians (well, okay 6) to a smidgeon of Mahalia Jackson’s febrile spirituality and the clattering edges of Tom Waits, it might be more accurate to say the group’s influence is the immersion of music itself. You can hear it in the care and love generously injected into the bones of each moment within this unique and possibly one-off debut record Unmap. Glowing with the heartfelt feeling of an intimate backwoods gospel collection, plus a spirit of patience and thoughtful repetition, the music of Volcano Choir is as dynamic as it is pulsating with life.

Unmap ultimately and finally came together over a weekend in November 2008 in Fall Creek, Wisconsin, at Vernon’s new recording studio. And while it is at its heart a record about the allure of being with people you need and making something with them, it is also a document created by musicians with rare gifts, getting together to exorcise their ideas about beauty. This scaffolding of loops and off grid tempos for choral style vocals offers a state of continual surprise, call it unexpectation.

From the first few acoustic bars and choral embrace, you can feel the warmth of this record seeping under the skin and the notion of ‘songs’ is carried away by shape-shifting music that drifts like smoke. ‘Husks and Shells’ blows into ‘Seeplymouth’ that plays out like a less jazzy Isotope 217, before venturing off into more orchestral terrain and breaking down into a marvellous pile up. We hasten to add it’s never messy, as the restraint is so resolutely intuitive. This bleeds into the most ‘pop’ number on the album in ‘Island, IS’; beautiful and thoroughly addictive, with the band swirling around Justin’s words and going where they will. The skipping ‘And Gather’ suddenly breaks into the freeform percussion of ‘Mbira’ that showcases the depth of Vernon’s voice these days. It seems as though the growth in the last year has embellished and freed him to move into territories previously not breached. The results are a significant addition to his range. ‘Cool Knowledge’ sees Vernon lead a chorus of mewing voices, riding what seems like the bare bones of leftover kit. A fabulous minute of music.

‘Still’ is the summation of not only Wisconsin but this group. It breathes a different air and moves at its own pace. It appeared as ‘Woods’ on the Bon Iver Blood Bank EP, but whereas it showed itself with digital vocal effects and little else, this time it is shorn of any artifice and it is arguably the album highlight as a result. The album is rounded out by the modern day spiritual of ‘Youlogy’. Like a male Mahalia fused with Fennesz, it brings to a close a lovely record of impromptu and ragged glory.