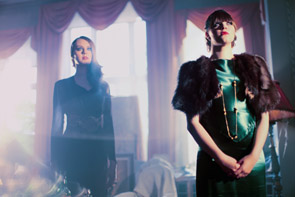 First Aid Kit arrive in the UK this week for Jack White support dates at Brixton Academy and Hammersmith, proving to be another milestone in the inexorable rise of these marvellous sisters. To celebrate they have unleashed their compelling video to ‘Blue’ here http://youtu.be/IL-sm1rEtiU

The album The Lion’s Roar has sold 150, 000 copies worldwide in little over five months and is fast  becoming one of the biggest indie breakthroughs of 2012.

New single ‘Blue’ is released on 25 June via Wichita.

As well as playing noted UK festivals such as Latitude, EOTR and Bestival, the band have confirmed Newport Folk Festival, Lollapalooza and Austin City Limits in the US. Come November, First Aid Kit return to the UK playing their biggest headline shows to date.

Praise for The Lion’s Roar –
‘Album of the Week’ Independent on Sunday
“A brilliant album from sisters Klara and Johanna Soderberg” 5/5 Sunday Telegraph
“An intoxicating mix of widescreen Americana and Scandinavian poise” 4.5/5 The Sun
“The voices of Johanna and Klara are enough to weaken knees… The lyrics’ heavy-hearted take on relationships is more evidence of an astonishing maturity” 4/5 Mojo
“Klara and Johanna Söderberg have crafted remarkably mature work” 4/5 Uncut
“It’s pretty perfect” 8/10 NME
“Nothing short of magical” 4/5 The Fly
“The second album from the Swedish Soderberg sisters is full to the brim with charm”
4/5 The Guardian
“A country-rock revelation” 4/5 The Independent
“There’s genuine beauty here” 4/5 Evening Standard
“Their truly sublime sibling harmonies are still the shining beacon they always were” 4/5 The List
“The Lion’s Roar is full of rich textures that unfurl around Klara and Johanna’s bittersweet harmonies… First Aid Kit have woven their Swedish sangfroid into a bewitching brand of Americana” 8/10 Clash
“4/5” Q
“4/5” The Times
“4/5” Daily Mirror
“8/10” Loud & Quiet