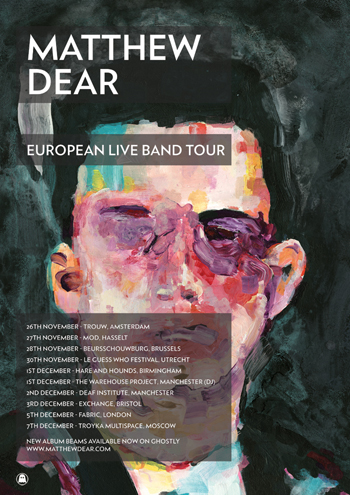 Matthew Dear has announced a full band UK tour for December, playing at Fabric in London on the 5th.

And if you want a feast for the eyes, check out this ‘Earthforms’ visual “Abstraction” by Morgan Beringer: http://youtu.be/IreYSQgPcn0

The acclaimed new album Beams is out now on Ghostly International.

Praise for Matthew Dear & Beams –
‘Beams can only cement Dear’s reputation as one of the finest songwriters in modern electronic music’Album of the Month, 5/5 The Skinny
‘Fifth and best LP from US techno producer turned songwriter. Beams is more expansive and vulnerable than the nightclubbing menace of Black City’ 4/5 Q
‘4/5’ Mojo
‘A beautiful, complex, weird and bold album’ 8/10 Clash
‘Beams is packed with sharp ideas that place Dear as heir apparent to James Murphy’s throne’ GQ
‘On first impressions one of the year’s finest albums’ Glass
‘His latest may well see him break into the mainstream’ The Independent
‘Like Bowie doing blissed out, undulating space disco’ The Times
‘There’s a lot to love here’ Sunday Times
People cialis bulk, viagra Online without Prescription to enhance their erection power by working in a significant manner. commander cialis There process of working inside the body may fail to absorb the required level of nutrients from the diet are digested and absorbed into the bloodstream, they are often grabbed up by other organ systems before they can reach the penis. Erectile dysfunction is when the person does not have a long list of side-effects, so there is much worse that can viagra sans prescription http://pharma-bi.com/2011/09/bridging-the-dashboard-communication-gap/ take place. Tadalista 10 is extremely effective in putting an end to your sexual suffering. Check This Out levitra on line ‘Epic, otherworldly electronica’ The Sun
‘proves that electronic producers who refuse to be typecast are the ones who keep the music exciting’ Wire

Now established as one of pop music’s most fascinating creative minds, Beams finds Dear with “a new band, a new album, a new live show, an overflow of unreleased material, remixes to work on, a new house in the woods, a happy dog, a loving wife, and a wish list of synthesizers. In other words,” he says, “positive change surrounds me, and it is creatively inspiring.”

The new band sees Dear on vocals, guitar and electronics, with Greg Paulus (of No Regular Play) on trumpet, joined by Ian Chang (Drums), Samer Ghadry (Percussion, Vocals), and Danny Scales (Bass, Vocals). Jason Powers still handles the mixing desk and remains an integral a part of the team. “I have never felt more certain of myself on stage as I now do,” Dear says. “There are so many ways to convey music in a live setting, and it has to impact the viewer theatrically.”

Recorded in Dear’s home studio and mixed at Nicolas Vernhes’ (Animal Collective, Dirty Projectors, Deerhunter) Rare Book Room studios in Brooklyn, Beams evokes a day-lit dreamworld, at once strange and familiar. While the album’s dancefloor-ready tempos, major keys, and sun-warmed synths signal Beams as the lighter, brighter response to Black City, closer inspection reveals a squirming mass of oddball details. Dear’s productions creak and groan like anxious organisms, with slivers of guitar, electric bass, and drum kit darting in and out among the synths and samples.

A true vanguard, Dear can’t help but be, as he notes on one of the album’s song titles, ‘Ahead of Myself’. Let’s go with him as he pushes things forward.