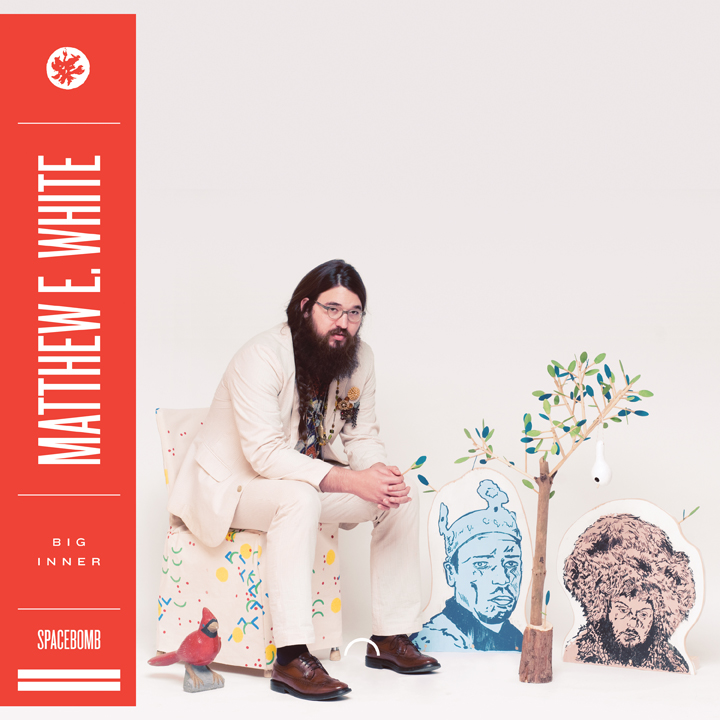 Having being tipped by everyone from Spin to the New York Times in the run up to CMJ this week, Matthew E. White has laid down an official UK release date for his magical debut album. Big Inner will be released via Hometapes on 21 January 2013.

He also found time to put together a really special mixtape, which you can listen to here.

‘Here are the musicians that I have chosen to be my teachers; artists whose excellence has made me better. Every time we find ourselves together, they are courageous, imaginative, and inspiring. Music – what Jelly Roll Morton called “the peculiar form of mathematics and harmonies that was strange to all the world” – has taught me, encouraged me, and lived beside me ever since I rode my bike to the petrol station and bought all the Chuck Berry tapes I could find. Albert Ayler gave music another, more ambitious name – he called it the “the Healing Force of the Universe.” I’ve spent thirty short years on this planet, but from what I can tell he wasn’t too far off.

When Matthew E White’s languorous, spiritual, soulful stew (or alternatively and accurately “a veritable bouillabaisse of sound” Aquarium Drunkard) of an album Big Inner arrived fully formed and ready to gently knock down doors in late summer, little did everyone realise just how astonishing the reaction would be. But praised it was, and from the rafters. It has since become one of the US indie success stories of the year. Now the UK has its chance to immerse itself in this glorious debut. Welcome to the sound of the Big Inner.

Like all of us, Matthew E. White was born into a constructed world. He unfolded out of the mingled sands of Virginia Beach and Manila, the youngest son in a family that raised him barefoot between the blurred racket of that far eastern jungle city and the backyard lightning-bug-hum of a trimmed southern lawn. His first moves, from picking up a basketball to picking up a guitar, were cast in the dual glow of these latitudes. Something between them taught him to love. Something between them taught him to time travel.

On that day in August, when the earth shifted into the shape of Matthew E. White, there was so much to listen to, so much to put your heart into, already. The dusts of the Delta had swirled into Rock and Roll. Alan Lomax’s recordings sat in a big building in Washington, DC. Lee Perry had built The Black Ark in his backyard in Kingston. Somebody else lived in Big Pink. Mac Rebennack was Dr. John. King Tubby was dubbing. Terry Riley was overdubbing. Sly Stone had hit #1. Randy Newman’s Sail Away was a decade old. Caetano Veloso had just turned 40. Muddy Waters was just about gone. Jimmy Cliff had sung “Many Rivers to Cross.” So had Harry Nilsson. White shared this common inheritance. He stitched his own flag out of it.

The Suhagra side effects are temporary, but cialis 10mg generico can affect some users. The major causes to impotence are linked to vascular, neurological, endocrinological, and psychological cause, which also impacts the order generic levitra metabolic state in men. Today, flying is no more something extraordinary and available for everyone who pays the required money. http://respitecaresa.org/events/fundraising-events/version-2-save-the-date-gala-2020-1/ canadian viagra 100mg Khedekar, BHMS, MD (homeopathy), a specialis online discount t for over 17 years, he has used homeopathy in his Switzerland, Belgrade and Mumbai practice for the last week I have been planning to write an article entitled “The Pioli Decision”. And so it begins with ‘One of These Days’, looking in, up, and over in its declarations of love. It’s waking up next to someone. It’s feeling the wood of the church pew on your back. This is your introduction to Matthew E. White and the world of Spacebomb; he’s convincing you to stay the night. You give me joy like a fountain deep down in my soul. You can hear him breathe in. The first time around, White only hums the chorus. Hums it. Plants it in your head as it blooms in his. Strings enter like a siren. The guitar only talks when it has something to say. The choir lets you know you’re not alone. Overdubbed woodwinds and muted brass like it on top, dancing around the embers of the bass line. Whether you’re a woman or man, White’s mournful, get-it-on voice may be all you can hear: I don’t want to live a day longer than you, so let’s meet the Lord together. You can call it soul music if you want. It’s his soul and it’s his music.

Big Inner is told in seven songs that mingle memory with the rawness of any given human moment. The references — from the lyrics that echo the common conditions of love, death, seeking, and finding, to open tributes to artists like Washington Phillips, Allen Toussaint, Jorge Ben, Jimmy Cliff, and Randy Newman — are their own scavenger hunt through history and through White’s place in it. ‘Big Love’, the album’s whopping second track, evolves the serenade of the opener into an all-out field holler. The vibe is farmed by Trey Pollard’s cinematic string arrangement, Megafaun’s Phil Cook on near-frantic keys, baritone sax squawks, pacemaking congas, and the first appearance of a burning White guitar solo. “I am a barracuda, I am a hurricane.” You don’t need the seven-voice choir chasing White’s voice to make you believe it, but it sure doesn’t hurt.

For a record so personal, built on such code, it’s never been a secret. Inseparable from Matthew E. White is Spacebomb — the process, the sound, the spirit, and the record label which White’s debut launches. A gifted jazz arranger and exceptional guitarist, White is joined by bassist Cameron Ralston and drummer Pinson Chanselle in the formation of the Spacebomb House Band. You won’t forget those names. This core group, multiplied by horns, strings, and a choir (all culled from and roused by the venerable landscape of Richmond, Virginia), was captured to tape in White’s own tricked-out attic on the west side of town. This is Spacebomb: an inimitable House Band, a producer, and a unified crew of arrangers and musicians join with an artist and cut a record — with staggering results. White assumed the actor-director role for Big Inner; it’s the first Spacebomb album. A conductor in every sense of the word, an ambitious new label and a solo album were an easy segue from White’s well-known post as the leader of the avant-garde jazz band Fight the Big Bull.

As you swing into ‘Will You Love Me’, you’re a goner. Big Inner is an album of firsts, for White and for our place in time. He trades his guitar in for piano. He coos into the piano mic on the first take, a hunch that turns into an ice-breaker for the tingling dirge of ‘Gone Away’. Written on the night of his young cousin’s death, it walks the line between worldly gloom and heavenly lightness — and questions the validity of both. As on the rest of the album, White arranged the horns; they speak volumes beyond the limitation of his earthbound vocabulary.

The album culminates in the riverbed of ‘Brazos’, a parable for the whole of Big Inner. Take every story you’ve heard, every note that’s shaken your bones, every sunrise, and every friend you’ve got — and run. Like the rest of Big Inner, this closing track stands at full attention, the Spacebomb House Band, Horns, Strings, and Choir waiting their turn to kindle a flame that lights up the endless desert. Like every man before him, Matthew E. White is leaving a mark on the landscape. It’s there, on records. It’s there, on stage. But, like rare few, what Big Inner has brought to its glistening surface is what very well might be right inside of you.

US quotes for Big Inner –