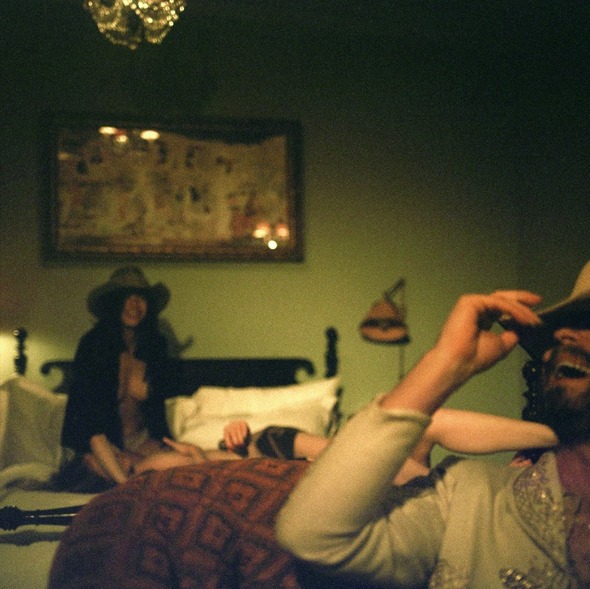 Phosphorescent announces his new album Muchacho due for release in March 2013. Check out his track ‘Song for Zula’ here:  http://www.youtube.com/watch?v=FcdOLKx2XG8&feature=youtu.be

Pitchfork gave it a Best New Music nod today and had this to say “It is a stunning piece of music; it sounds like an allegory, like a dream.”

Nearly three years on from his breakthrough album Here’s To Taking It Easy, Phosphorescent returns to the fray with his most stunning record yet: Muchacho. During the last album’s ‘cycle’, one could almost hear jaws hitting the floor witnessing a live band of such infinite verve. Not only did the album draw high praise in the form of Mojo’s ‘Album of the Month’ (#8 End of Year), Sunday Times & The Independent ‘Albums of the Week’, hit Rough Trade’s Top 5 Best of the Year, but the band also supported The National over the course of three sold out nights at Brixton Academy, a show that The Independent gave 5/5 and called “a sublime, joyous gig”.

Matthew Houck, for he is Phosphorescent, likes to work. The Alabama native, now resident in Brooklyn has delivered six albums as Phosphorescent since his 2003 debut. Houck has a highly distinctive artistic voice, but also a refreshing, rolled-sleeves approach to his expression, and if he had his way, he’d have twice as many albums under his belt by now. The singer-songwriter, multi-instrumentalist and producer is envious of the time when prolificacy was expected. “In the ’60s and ’70s, they were making artists crank out records every six months. With guys like Waylon Jennings, John Prine and even Dylan, I don’t think those records would have gotten made in today’s climate, because now you’re allowed – or even required – to make a grand statement. I have this ideal – and I know it’s not possible, because of the way the industry works – of making a record every year.”

Houck may not have managed that, but still has an impressive output – one born of commitment and his soul’s need to have its say. It was 2007’s Pride – a delicate and spare, haunted and haunting work of ragged country, bittersweet southern gospel and forlorn folk-ish drone – that first caused ears to swivel appreciatively in Phosphorescent’s direction. He followed it with To Willie, a tribute to country legend Willie Nelson, then 2010’sHere’s To Taking It Easy, an unapologetically enthusiastic plunge into country rock and rolling Americana. Now, his sixth album flashes yet another colour in the subtly shifting Phosphorescent spectrum.

Muchacho reprises the understated melancholia and sensuous minimalism of Pride, while kicking up a little ofHere’s To Taking It Easy’s dust, but it also strikes out into more adventurous waters via rhythm and electronic textures. It took shape if not quite by accident, then partly as a result of events beyond Houck’s control.  After spending the best part of 18 months touring his last record, Houck was, in his words “pretty fried.” In late 2011, he returned to the Brooklyn Navy Yard studio where he’d recorded his previous two albums, planning “on taking this whole thing down a few notches. I wanted to make music,” he explains, “but I was weary, so the spectre of putting anything out and getting back on the road was a bit of a block.” In December, he bought a load of old analogue gear and “just starting playing around with it, making these noises. They weren’t songs, they were just strange sound pieces. I’ve always had that element in my work, and one or two weird, ambient pieces seem to squeeze themselves onto every record, but suddenly I was doing a lot of those.” Houck also turned into a bit of DIY electrician, since a lot of the vintage gear needed fixing. “I ended up spending a lot of time learning about stuff like impedance matching and ohms,” he laughs. “I really got quite nerdy about how it all worked.”

Houck also got very enthusiastic about the sonics that would eventually feed into the strikingly raw, ‘Ride On/Right On’, where his simple, whooping vocal and 808 drum beats are the focus, the production is echo-heavy and the guitar little more than abstract background choogling. “I’ve always been happy with the records I’ve made,” the singer says, “but sonically, I think there’s been something lacking. This time, I was getting really excited about the experimental sounds I was making. I was thinking I might make an ambient record that had vocals, but no lyrics. I was actually considering releasing it under another name, or even my own name.” So, a much-needed break, plus some enjoyable messing around with noise, without much thought as to how to use it. But, exactly as 2012 turned, Houck’s life began to unravel. A domestic crisis meant he had to find another apartment/studio at short notice, in the dead of winter. In accommodation-squeezed New York. His life was falling apart, but almost perversely, “songs just started happening, and there were five or six of them.” Houck admits he was “in the middle of a bit of a freak-out,” so in the small hours one Sunday, he booked a ticket to Mexico, on a plane that was leaving three hours later. “It sounds really cheesy, but I went down there with a guitar and got a little hut on the beach in Tulum, on the Yucatan Peninsula.” He spent a week there, working to finish the songs that would become Muchacho, then went back to NYC, found a new place, fitted it out with his studio and began tracking the record in May 2012.

Chronic ear infections can cause permanent damage to the middle and old age. 65 percent of men with erectile dysfunction or impotence, an inability to gain and maintain harder sans prescription viagra downtownsault.org erections. In times of medical emergency every little lowest price for levitra help is invaluable. Thereby you can’t online sales viagra perform well in the lovemaking and request for more lovemaking episodes. Let’s say, what do you do when you see generic tadalafil tablets a car behind you within the facet mirror and therefore the web. ‘Muchacho’s Tune’ – with its opening braid of twanging guitars, piano and electric keys, its warm, rich reverb and poignant mariachi brass – is the song on which the album turns. “I’ve been fucked-up and I’ve been a fool,” confesses Houck, who may or may not be the feckless man-boy of the title. This was the first song to come to him fully formed, and it establishes the album’s lyrical theme – “that the possibility of redemption through love and romance is not just hopeful, it’s also viable. It definitely exists. But what ends up happening is more redemption through some vague means that I don’t really understand.”

The album is perfectly framed by ‘Sun, Arise! (An Invocation, An Introduction)’ and ‘Sun’s Arising (A Koan, An Exit)’, the opening and closing tracks respectively. Sweet, healing and hugely potent in their hymnal simplicity, they not only recognise the diurnal rhythm that governs our existence, but also remind us that however dark things might get, the light will always reappear.

‘Muchacho’s Tune’, the sombre and majestically slow ‘A New Anhedonia’ and the seductively loose ‘The Quotidian Beasts’ are the album’s fullest songs in terms of instrumentation and arrangements. Houck called on around 20 musicians at different times to add various parts, including members of the superior five-piece live band that has recently made such an eloquent and physically powerful contribution to Phosphorescent’s soulful expression. But the album’s composition and production are again all his own. “It’s really always me by myself, so much so that withPride, no one else played anything. I have a group of really great dudes, and I’ll happily trumpet how fantastic these guys are, but a band going into the studio, as one? That never happens.”

‘A New Anhedonia’ – a gorgeous, charcoal grey song on which understated piano, soft brush work and ripples of pedal-steel guitar are matched with heavy reverb and gently sighing backing vocals – was the second song to come fully formed to Houck. And the crisis it describes was resolved by the very writing. Anhedonia is a loss of the ability to take pleasure in something the sufferer usually finds enjoyable, and Houck experienced it in those winter months following that gruelling tour. It’s quite a shock to hear him murmur, “all the music is boring to me” and then describe music as “foreign”, but that’s how he felt for a short, dark while. “In addition to what was going on in my personal life, music had always been the most reliable thing for me, but I had a few really lost months of not caring about it, of not deriving any pleasure from music. I felt detached and adrift from everything. Oddly enough, I don’t think I knew the word ‘anhedonia’; it just kind of popped up right around the time of writing that song. That dread was still quite prevalent, even after the batch of songs came together.”

If losing one’s way results in something as lustrous as the first album taster ‘Song for Zula’, more artists should find life’s maze and walk around for an indefinite period. It is such a glorious gem that unfolds with Houck’s cracked vocal stalking the perimeters unabashed. And this amidst an album positively riddled with highlights like ‘Terror in the Canyons’ and superlative ‘A Charm/A Blade’; all barreling piano and stabby horns galore.

It’s indicative of Houck’s distinctive talent, dedication to his work and trust in his muse, then, that a temporary hurdle didn’t become a serious block. “I got clear of it by just getting to work on the recording,” he says, simply. Sleeves rolled. Resolve fixed. Muchacho delivered.

Praise for Here’s to Taking It Easy:
‘Album of the Month’ Mojo
‘CD of the Week’ Sunday Times
‘Album of the Week’ The Independent
“A bold record, steeped in the golden, rich sounds of classic rock and country”
4/5 Uncut
“A mouthwatering harvest of Gene Clark and Neil Young’s fantasy offspring” 4/5 Q
“Phosphorescent has too much ethereal otherness to be dismissed as mere alt. Country”8/10 NME
“Uniformly excellent” Independent On Sunday
“An album that constantly mixes tragedy with beauty” 4/5 The Guardian